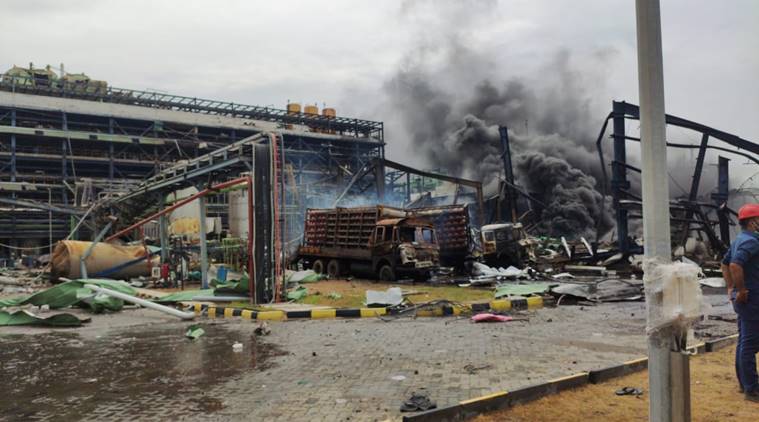 10 workers have now died following an explosion on 3 June, at a chemicals factory in India, reports news agency The Indian Express. Reportedly, more than 70 others were injured.

The blast occurred at a facility owned by specialty chemicals and intermediates company Yashashvi Rasayan, in an industrial area located in Dahej, in the Bharuch district of Gujarat, India. New Delhi Television (NDTV) reports that the ensuing fire engulfed the entire factory.

The Indian Express reports that at the time of the blast nearly 150 employees were inside the factory. Of the 77 injured workers admitted to hospitals for treatment, 33 have now been discharged. Two workers are in critical condition, according to M D Modia of the General Administration Department of the Gujarat Government.

Following the explosion – reportedly heard from 3 km away – around 4,800 people were evacuated from the nearby villages of Lahki and Luvara, says another report from The Indian Express. According to Times Now, Modia said this was due to the presence of poisonous chemicals. The Indian Express reports that it was as a precautionary measure. It is not noted whether residents have yet returned to their homes.

According to The Indian Express, the Gujarat Government issued a closure notice to Yashashvi Rasayan for the site where the incident took place, and additionally ordered an audit of all the factories in Dahej. The report added that according to an official release from Vipul Mittra of the Gujarat Government, “[t]he unit will not be allowed to resume operations, until adequate safety measures are in place”.

N D Vaghela, Assistant Director in the Office for Industrial Safety & Health, reportedly said that the blast occurred in a chemical tank and damaged others. Reportedly, officials are unable to enter the storage area for now.

Rajendrasinh Chudasma, Superintendent of Police in Gujarat, said that a police investigation is underway, reports The Indian Express. He adds that parallel probes are being carried out by Forensic Science Laboratory, factory inspector and industry safety officials.

Modia noted that any negligence found on the part of the owner would be dealt with strictly.

Reportedly, the factory owner has started to process payment of INR500,000 (US$6,611.8) each to the families of dead workers.

Ahmed Patel, MP in India’s upper parliamentary house and a senior leader of the Indian National Congress party, said: “The buck stops with the [State Government] to ensure factories have completed safety audits.

“We are concerned that recent changes to labour laws will incentivise unsafe work conditions.”

The recent explosion comes just a month after an explosion in Andhra Pradesh, India, caused by a chemical leak at an LG Polymer plant. Based on conflicting reports as many as 12 people died, and 1000 were affected by the styrene vapour leak. NDTV further reports that 200 people were hospitalised.